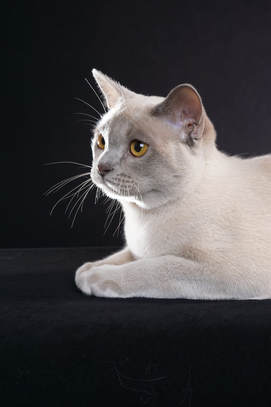 1930 - Wong Mau was the first Burmese who was imported to the USA from Rangoon, Burma. Dr. Joseph Thompson, who imported her, was impressed by her look and developed a breeding program along with other well known breeders.  The Siamese were considered to be the closest in appearance and was used in the breeding program.  During the next couple of years the breeders had created a unique breed.

1934 - Proposition was made to CFA to recognize the Burmese as a unique breed.

1936 - The Burmese was approved by CFA as a breed. At this time sable (brown) was the only color accepted in CFA.  The Burmese at this point was a moderate breed when it came to body shape and head type.  The breeders continued using Siamese in their breeding programs due to the limited breeding stock.

1947 - CFA suspended registration of the breed until the breeders stopped using the Siamese in their breeding programs.  There had to be three generations of pure Burmese in the pedigree to be registered as a Burmese in CFA.

1949 - The first Burmese cats (brown) were exported from the USA to England.

1952 - The Burmese breed was recognized by the Governing Council of the Cat Fancy in England (GCCF).

1957 - CFA resumed registration of the Burmese.  Sable (brown) is still the only color accepted by CFA.  Australia's first Burmese arrived from England.

1959 - CFA accepts a new standard for the Burmese developed by United Burmese Cat Fanciers.  This standard has stood essentially unchanged since then in CFA.  The standard asked for a Burmese with a round head with a short muzzle, round eyes and a compact body.  This was the first step towards the difference between the Burmese type in the United States and the rest of the world.

1963 - In England a Blue Burmese female managed to escape while in heat and was mated by a Red tabby shorthaired cat.  A black tortie kitten from this breeding was kept and used in the breeding program.  A planned breeding in England occurred between a Blue Burmese female and a Red Siamese.  From this litter a Blue Tortie female was kept and this was the beginning of the new colors (red, cream and the four tortie colors).  At the end of the 60's there were six colors of Burmese in England: brown, blue, red, cream, brown tortie and blue tortie.   A few more additional cats were imported from the United States at this point to acquire the chocolate gene.

1970 - A consistently rounder head  style of Burmese was produced in the United States which some breeders call the Contemporary look.

1973 - Cream and Red Burmese were recognized by GCCF.  First Lilac Tortie is born in England.

1984 - CFA acknowledges that the  "Malayans" were truly Burmese and they are registered as "Burmese Dilutes" and competed in their own division in CFA.

1993 - Exhibitors in Europe were not showing in CFA due to the difference in type between the CFA Burmese and the FiFe (cat association in Europe) Burmese.  At this time they referred to the FiFe Burmese as Foreign Burmese.  The Foreign Burmese was accepted into the Miscellaneous class (non-competitive) in the USA starting in May of 1994.  The name was also changed from Foreign Burmese to European Burmese.  At this time a standard had to be developed for the European Burmese in CFA.  Wayne Trevathan (CFA-Judge) was involved in putting together a standard based upon the standards used in FiFe, GCCF and Australia.  Ann-Louise DeVoe, having shown in Sweden before moving to the United States,  provided a great deal of information about the standards used in the different organizations and assisted in writing the European Burmese Standard.

2000 - The European Burmese breeders asked for advancement to Provisional status, which was approved by the CFA board of directors.

2002 - The CFA Board of Directors approved the advancement of the European Burmese to Championship status in the USA starting in May of 2002 !

2012 - ACFA Board of Directors approved European Burmese as a separate Breed from Burmese in America.  They were automatically approved to Championship status.